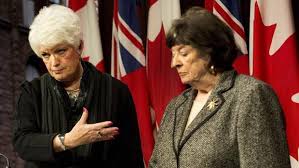 The recent Review of the TDSB by Margaret Wilson and the consequent directions from Education Minister Liz Sandals are troubling to say the least. There is no doubt that the intervention by the Ontario Government  into the affairs of the TDSB is as much about closing schools and reducing the democratic role of Trustees, as it is about fixing the dysfunctional relationships  between Trustees and senior staff.

The review was set up to study current operational issues and has resulted in recommendations to curtail the ability of Trustees to represent their constituents. While the behaviour of a small group of Trustees (mostly now departed) and Board staff was rightly called into question, the review places all the blame for the dysfunctional relationships in the Board on the Trustees to justify closing their offices, curtailing their ability to connect with constituents, and removing them from the advocacy role they have traditionally held at the Board. Toronto schools would be very different if past generations of Trustees had not fought for the quality of education for everyone in this city.  Parents will also lose a vital voice as to how the education system is run and what goes on in their local school.

Closing schools is a central part of the Ministry directive, which has nothing to do with the purposes of the review. The report shifts the debate away from the problems created by the government’s inadequate funding formula by focusing on closing and selling off schools to solve the TDSB’s financial difficulties. Kathleen Wynne herself has said on many occasions that we need to develop schools as community hubs, and yet these recommendations reject that model by calling for closures. Once schools are sold off they are gone forever and the public education system cannot respond to changing local demographics and the diverse and growing needs of the community.

This report and its recommendations will affect all who work in or with the public education system, parents whose children attend public schools, and the vitality of communities that surround schools. We all need to be concerned and be vigilant to oppose closing of local schools and support Trustees in their role as advocates for the local education system.

As we move forward, OSSTF, CUPE 4400, ETT, Campaign for Public Education, Labour Council, and others will be working together to address these issues.