Many 100s teachers rally at board & give TDSB an F several 100s of elementary teachers, parents and community allies gathered at 5050 Yonge St in Toronto and gave  [more photos]  Andy Lomnicki, VP of ETT noted that:  “For the past few weeks, the TDSB’s handling of Bill 115 and fall Progress Reports has done nothing but inflame tensions between teachers, principals, and parents and sow confusion. In stark contrast to the majority of schools boards across Ontario, the TDSB allowed Principals to withhold Progress Reports completed by teachers in accordance with Ministry of Education requirements.”

Many confused parents have been denied access by the board to completed reports and many believe, sent misleading and disingenuous information concerning their status.
Inside the TDSB HQ, 22 elected trustees and 2 student trustees elected new chair and co-chair along with board committee members.
Recent Posts Give the TDSB an “F” MondayThe public board -TDSB 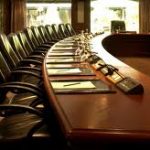