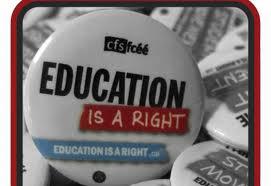 Waving aside the financial woes of a North Vancouver school board, the court concluded on Tuesday that it had discriminated against a dyslexic child who was not given adequate help to attain literacy.

Madam Justice Rosalie Abella ordered school authorities to reimburse the family of Jeffrey Moore for several years of costly private education they sought after Jeffrey fell far behind in school.

“Adequate special education is not a dispensable luxury,” Judge Abella said for a 9-0 majority. “For those with severe learning disabilities, it is the ramp that provides access to the statutory commitment to education made to all children in British Columbia.”

Advocates for the disabled were overjoyed by the judgment. They said that school boards that cannot furnish compelling evidence to justify under-funding must henceforth provide genuine help to children with learning disabilities.

“I’m ecstatic,” said Yude Henteleff, a Winnipeg lawyer representing the Learning Disability Association of Canada. “This is a profoundly important victory. Time and time, school divisions say: ‘We can’t afford this.’ Well, now they can’t afford not to.”

Mr. Henteleff said that parents of any child with a learning disability can demand action from their school board. “If they don’t get it, there will be a plethora of actions all across the country,” he said.

Rick Moore, Jeffrey’s father, expressed elation. “This case is about the thousands of kids who can’t afford a private school education and … are stuck in the public school system; who end up dropping out and become a burden on society,” he said.

Mr. Moore, a bus driver in Vancouver, said that his family scrimped to pay Jeffrey’s private school tuition. Aided by the Vancouver Community Legal Assistance Society, they simultaneously waged a 15-year war with the school system that led them through human rights tribunals and law courts.

The family’s lawyer, Frances Kelly, said she focused the case not just on Jeffrey’s plight, but on the high price society pays when frustrated children fall by the educational wayside.

“We had evidence that jails and welfare systems and hospitals are full of people who have learning disabilities that were never properly addressed in the education system,” Ms. Kelly said.

Now a 24-year-old plumber, Jeffrey Moore recalled losing his confidence as he struggled to complete school assignments. “I had no idea why everyone in class was moving forward and I was on the sidelines,” he said. “I didn’t even know how to put a word together.”

He said it is immensely satisfying to have helped future generations. “Kids won’t be left in the dark,” he said. “They are going to get the help they need before the damage is done; before they feel stupid or that they are unable to do anything.”

One of those children – nine-year-old Griffin Lajoie – has waited many months for Toronto school authorities to provide resources that will help him rise above a visual-spatial learning disorder that was diagnosed last year.

“I am over the moon that the Supreme Court has ruled that our kids will have access to resources that they need,” said Griffin’s mother, Lesley Sargla. “It is a basic right. It is a reasonable expectation that children with learning differences be held to the same academic standards as their peers and that our kids graduate from public school being fully literate.”

Governments fought hard at the Supreme Court hearing to prevent judges from taking a role in setting educational spending priorities. An Ontario government brief also warned that reimbursing the Moores for their tuition expenses could badly skew educational priorities.

“If this remedy is upheld by this court, private school tuition payment orders will be a widely sought and sanctioned alternative to requiring boards to provide appropriate accommodation within public schools,” it warned.

A. Wayne MacKay, a Dalhousie University law professor, said that the court has left governments a certain amount of wriggle room to reduce spending on special-needs programs – but only if they can show that their budgetary concerns are truly pressing.

Prof. MacKay said it was unusual for the Supreme Court to intervene in a policy area such as education, particularly with a decision that has serious cost implications.

“In my opinion, this may be the most important human-rights case in the last decade or so,” he said. Many 100s teachers rally at board & give TDSB an FEducation matters, The public board -TDSB