“Wash your hands” of these recommendations

“The province may want to clip their wings, but the public doesn’t appear to agree” [Star writer, Kristin Rushowy reports]. “At a marathon consultation meeting Monday night with 42 delegates, Toronto District School Board trustees — lambasted in a recent government report — heard from union leaders, parents and community groups who said they want and need the elected officials to be their voice.
“I feel a deep sense of encouragement,” said board chair Shaun Chen during a break from the almost 60 public delegations that were confirmed for the night. “Many spoke of the importance of the role of trustees. I feel a sense of hopefulness . . . and I hope the Ministry of Education takes the input of the public” into account.
A highly critical report, recently released by educational consultant Margaret Wilson and endorsed by Education Minister Liz Sandals, called on trustees to get out of the day-to-day management of schools, kicked them out of their offices, told them to fire their constituency assistants and accused them of overstepping their roles by taking part in the hiring of principals and vice-principals as well as superintendents.
Among the other orders issued by Sandals, which the board must meet by Feb. 13, is to create a three-year plan to close underused schools. (Wilson named more than 130 in her report with less than 60 per cent enrolment.)
Speaker after speaker said while trustees needed to get along better — “play nicely in the playground and find common ground,” admonished parent Stewart Nam — they are valued in the community. Several said they believe Wilson’s report threatens local democracy.
Many also urged trustees not to close schools or sell off valuable land.
“I would urge you to stand up and fight and challenge (the province) to do their worst,” said parent Michael Teper, who also said trustees’ response to Sandals’ recommendations should consist of two words — “sod off.”
“Wash your hands” of these recommendations, urged speaker Liz Rowley, a former trustee in the old East York board, noting none of the current trustees ran on a platform to close 100 schools.
She said the orders curtailing trustee responsibilities amount to the dismantling of the Toronto board.
“You are the most accessible, democratically elected ally (parents) have,” said speaker Domenic Bellissimo.
When asked how she felt about the “love-in,” trustee and vice-chair Sheila Cary-Meagher said “Isn’t it nice?”
“Pay attention to what these people are saying,” she said, calling Wilson’s report full of “half-baked and largely untrue statements.” 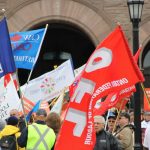